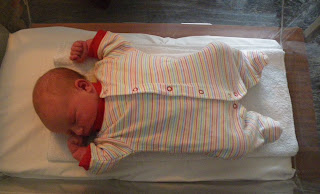 The outcome of a birth is, as you can see, beautiful. This is a picture I took of G at the hospital earlier on. She's still less than a day old, but has already shown a keen interest in sleeping, eating, filling her nappy and crying, usually in that order. We should be able to take her home tomorrow.

In the meantime I've got a confession to make. I had childbirth all wrong. Obviously I understood it was going to be painful for the mum, but all of those vaguely new-age books Mrs J had left lying around the flat (all featuring prominent references on the cover to the 'wonderful miracle' of childbirth) had lulled me into the idea that labour would be a serene progress with lots of soft lighting, meditation and optional incense. I now realise that notion to be complete bollocks.

Here's how it happened. Mrs J started having contractions at 2am on Tuesday. Sportingly she didn't wake me up, so I was more than a bit surprised when I went into the living room at 7 to her announcing matter-of-factly that she was having pains every four minutes and that our baby would be with us soon enough. We went to the hospital at 10ish, an examination confirmed that things were moving along well, and Mrs J got into the birthing pool at 2. She started having gas and air, and the contractions got stronger until she began pushing just after 4.

This was when the trouble started. Baby didn't want to come out. Mrs J had to have her waters broken for her in the pool, much to my irritation as I'd hoped baby would be born still in the waters and would look like a throbbing ectoplasm, which I could then burst to comic effect. The midwives could see the baby's head fairly clearly, which prompted the first of many calls of "you're doing really well, you're nearly there" which would become pretty familiar over the next few hours. At first Mrs J may actually have believed it, but she started to look at me and the midwives with increasing suspicion as she pushed and pushed, and not much happened.

At about 6 the baby's first Meconium (sqeamish? get over it, I had to) came out, which is generally considered A Bad Thing. This meant Mrs J had to leave the relatively comfortable surroundings of the birthing centre (I say relatively because the construction work taking place directly outside made it sound more like a dentist than a maternity unit) and head down to the proper ward. Mrs J was wheeled in, strapped onto a bed, put on a drip, attached to various beeping things, and told to sit quietly for half an hour. It was like going from Glastonbury to a Crimean War field hospital.

The drip helped baby move down a bit, and the midwives got Mrs J to start really going for it at about ten to 7. At this stage I was hoping it would be over straight away, because not only was she getting very tired (nearly three hours of pushing at this stage) but she was making some pretty frightening noises. As M&S might say, these aren't just screams, these are lung-bursting, deafness-inducing screams you can hear all the way down the corridor. Mrs J also wanted more pain relief by now, but the midwives told her to stick to the gas and air because anything stronger would slow baby up. This wasn't really what I wanted to hear.

As the father-to-be in this situation, there are two major problems. The first is that there is actually nothing you can do about it. I mean, nothing. There are only so many times "you're doing really well" is going to offer any genuine reassurance to your stricken wife, and that threshold had been reached some hours before. The second problem is that you know, she knows, the midwives know, everybody knows, that it is all your fault. I mean, all of this horror wouldn't be happening if it wasn't for you. There's really no getting round that. So, inevitably, you stand there watching it all unfold feeling pretty sheepish.

The final big push went on, and on, and on. It felt like hours, and I was only watching and trying to avoid getting my hand actually broken by Mrs J as she squeezed it while bearing down. Goodness knows how it felt from where she was lying, by now with her legs up and in stirrups. At least she was concentrating too hard to notice the midwives holding a lengthy discussion about where exactly the best place to cut her would be, while one held a frankly scary-looking pair of scissors. A doctor came in. There was some dark muttering about an emergency caesarian. Someone appeared in scrubs. A trolley was brought round outside.

And then, after hours of telling Mrs J that I could see the head, I realised that I actually could. Then more of it. Then, after the biggest scream of the lot which went right through me, I could see all of the head, squashed and purple. The whole baby was out next, just like that. Eighteen hours of labour and four hours of pushing for less than a couple of minutes of visible action at the end. As the midwives plonked baby onto the tummy of a very groggy and completely exhausted Mrs J, I confirmed it was a girl and cut the cord, spurting blood everywhere. I had a quick look around the room, and was reminded of the field hospital again. I spotted one of the midwives had brought in a kidney-shaped dish which could hold 800ml, and wondered to myself what it was for. A few minutes later I saw it again, full (and I mean full) of afterbirth. Where had it all come from? Well, I know where it came from, but, well, never mind.

Mrs J held our still-unnamed child for an hour or so, still using gas and air while the other bits they don't tell you about in the brochure took place. Then when I got to hold her, she immediately started crying, which I have to admit I found pretty funny. She settled down soon enough though. I couldn't help but notice she was heavy, and had a big head (which had apparently caused most of the problems) and big feet, so when the scales were wheeled in it was no surprise she tipped them at 9lbs 15oz, definitely a cruiserweight at least. We had a short chat and agreed to give her the name that had made it to the top of our much-discussed shortlist.

I stayed around for a few hours then went home to phone the relatives and drink a bit of ale and a bit of whisky. I went back today for five hours, and both Mrs J and G were asleep for most of the time, but that's hardly surprising. If I was in Mrs J's position I'd sleep for a week. I don't think she'll let me forget all that pain and effort in a hurry. I certainly don't think she'll ever let G forget it. The first day of her life, and we've already got a story that we can embarrass her with for years, happy days.
Richard at 17:52