And On The Eighth Day, Baby Rested Some More 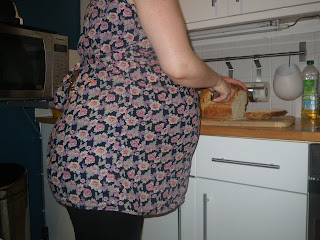 Baby is now eight days late. One of the statistics I've read (there are lots of these, and most are probably made up, but still) confidently states that eight days overdue is the average for first-time mums. But our little one's going to have to reveal a previously-hidden desire to hurry up and get out if she's going to make it in time to prove that dodgy fact. Maybe it's better that she waits another day - after all who wants to be average? - but I think Mrs J would be happier if junior got on with it.

The picture shows Mrs J slicing a loaf of bread I baked yesterday. Baking your own bread is one of many things you suddenly find time to do when you're hanging around waiting for a baby to arrive. Others include finally getting on with that book you've been reading for ages, drinking a lot of coffee, and significantly improving your ranking on the Xbox live cricket game. I suppose it's good to get this sort of thing done now, because we won't have time for any of it soon enough. Well, apart from the coffee, which I think is probably mandatory for new parents.

If nothing happens in the meantime, we've got another appointment at the hospital on Wednesday morning, to see if everything's still as it should be. Then there'll be a scan on Friday. And if there's still nothing going on after the weekend, by which time baby will be two weeks overdue, we're probably going to have to get her induced. So at least the waiting won't go on too much longer.
Richard at 13:53