Propping Up The Bar 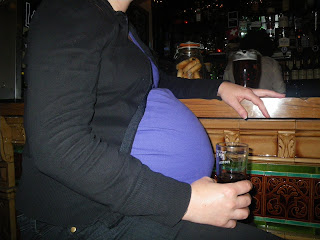 We've now reached five days overdue and there's still no sign of the little one. Much to my surprise, Mrs J suggested a trip to the pub. Her hip's still playing up a bit so we didn't go far, just a few hundred yards up Oldham Street to The Castle. Before we left I wondered what would happen if her waters broke while we were in the pub. Apparently if it happens in Asda, M&S or various other shops, they give you some vouchers. I don't really know why they do this, after all surely it would cost them to clear up the mess of the broken waters, so I don't understand why these shop owners would actually give money away.

Anyhow, no matter how doubtful I was about that, I suppose it was worth a try. A lifetime's supply of Old Tom, which they serve at The Castle, would go down a treat. Sadly, it didn't happen, although I was tempted to knock over Mrs J's Diet Coke (yes social services, it was a Diet Coke) and try to trick everyone, although the pub was so busy I don't think too many people would have noticed.

Earlier on tonight, I emptied most of our spicerack into the latest of our long series of curries. Still nothing. I think we've proved that the theory about curries bringing on labour is, to put it charitably, nonsense. Was that whole rumour started by the curry industry in a bid to boost sales? I think we should be told.